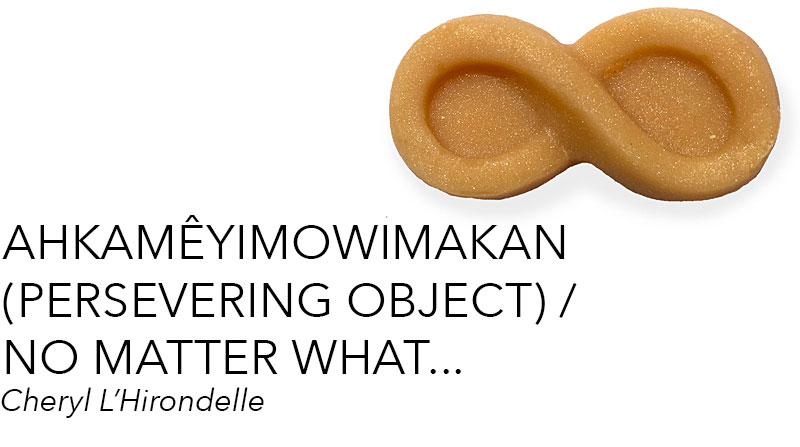 The Mobius strip (aka the infinity symbol) has, since 1816, been the symbol on the Metis flag. Long before I knew that one of my 32 great great-great grandfathers was Cuthbert Grant, Lord of the Plains and the first leader of the Metis, who also first flew this flag, I did in fact know something of its meaning as it pertained to how I was raised. In our family, our Metis-ness translated into self-determination, persistence, sheer will and even brute strength when called for.

Despite my esteemed ancestor’s place in history, I don’t generally call myself ‘Metis’, preferring other historical Cree worldview ways of describing myself: askiy ohci iyiniwak (people of/for the earth), ka atapiyimisohcik (they shall always own themselves); two terms I learned while working as a storyteller-in-residence in northwestern Saskatchewan. I rarely make art objects, preferring to conjure and manifest ideas. However the known correlation between diabetes, heart disease and obesity in Indigenous communities and the colonial shift away from seasonal and a land-based hunting and harvesting lifestyle toward a consumer and processed food dependency needs constant addressing. My intent with this object made with naturally harvested maple sugar, is that the co-dependent gift-that-keeps-giving vicious cycle shifts to an eternal and infinite loop of health and wellbeing.